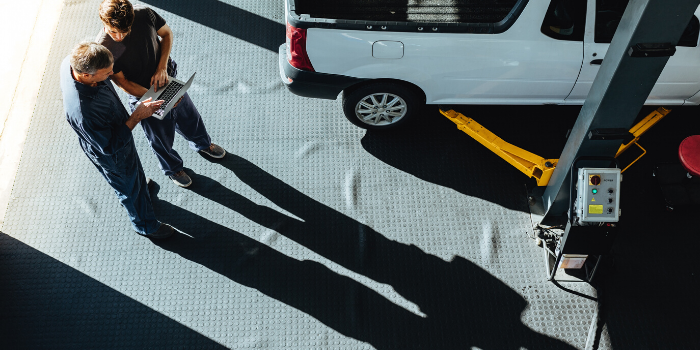 Bob watched over the rim of a lifted coffee mug from the doorway of his office. Spread out before him was the 20-bay expanse of concrete floor and overhead mercury vapor lights that was the service department of the local dealership. Twin rows of overhead doors made up the outer walls feeding vehicles into the building and allowing them to be moved out again at the end of their service.

He was watching one of the apprentice techs that hired on about 8 months ago. The other techs had vocalized complaints about him and if there was one thing he would not tolerate in his shop, it was discord within the ranks. He watched. Today, like yesterday, and the 2 days before that, he watched.

Through observation, Bob noted a lot of the concerns brought to him about this newer hire, Carl, were true.

It wasn’t uncommon to see him leaning a hip against the fender of whatever rig he was working on with his head bowed in silent homage to his ever-present cell phone, both thumbs bent and tapping the screen.  Carl wasn’t beneath pausing on the spot to reach into his pocket and tap around for few moments at any point in time.  While watching, Bob also noticed that another concern seemed very true: Carl almost never referenced the service information available on any one of 15 laptops set at key locations around the shop. Carl wasn’t a high-octane kind of guy. He moved slow. He was methodical but slow.  He also talked a BIG game. How by the time he was 35 he was going to own the dealership and how he would show the whole team how to REALLY run a dealership.

Bob clicked his tongue against the side of his cheek, glanced down into the white porcelain mug then lifted it to his mouth and drained the last of the morning brew from it before pushing himself out of the doorway and back into his office.

Most of the Techs in the shop had made a few laps around the track. They were in their late 40’s or early 50’s. They were “The Crew”.

Carl was the young buck in the herd. He was 28 years old.

While “The Crew” had grown up being taught to concentrate on what you’re doing: use caution and perform a task the same way every time; verify your facts and act; Carl was different.

Carl grew up in a different world. Carl grew up with a game controller in one hand and a cell phone in the other. Because of this he is a master of multi-tasking. Or at least hands down better than anyone else in “The Crew”. He didn’t need the service information laptops because he had it all on his cell phone. Carl wasn’t boastful when talking about owning the dealership, or another one like it. Carl believed it.

“The Crew” grew up in a time when a man knew his place, worked hard all week and saw failure as a disgrace. They were taught this from the very first day on the job.

Carl, on the other hand, grew up being told there is nothing he can’t achieve. Carl was applauded for his efforts, even if they failed. After all, failure is merely discovering one way something won’t work. Carl believed hard work would one day buy the world.

It was obvious to Bob why “The Crew” had complaints about Carl. He was different than them.

In every work environment, there are differences. And as younger workers join teams, “The Crew” members may find different work habits uncomfortable. Bob knew that Carl would likely need a talking to, not about his cell phone use, but in focusing and leveraging the expertise of his teammates, certainly.

Similarly, “The Crew” needs to understand the strengths Carl has that they don’t and that those differences can’t divide the team.

Recognize and take advantage of the differences in generation, skill, style on your teams: you’ll be happier, sipping on your coffee contentedly, and so will your employees.

Let me tell you about the time I didn’t wear an under shirt to a wedding. It was the summer of 2011. Newly broken up with my long-term girlfriend, I sought to find a second part-time job to fill up my now newly-acquired free time on the weekends. For some reason, I thought Wedding DJ […]

A Tale of Two Cities

A Tale of Two Cities: well, it’s actually one city, Chicago, and the tale of two trips there in attempt to buy a vehicle with very different results.  The lease on my wife’s Subaru Outback is about to expire.  So, we did some talking and some shopping and narrowed in on a target vehicle, a […]

Service: noun / sur vis / a helpful activity; help; aid; to do someone a service. Ignoring the December wind that whirl-winded around me making the leather collar of my jacket slap and sting my cheek, I slid the key into the lock of the walk-in service door at Hometown Motors. I had just been […]