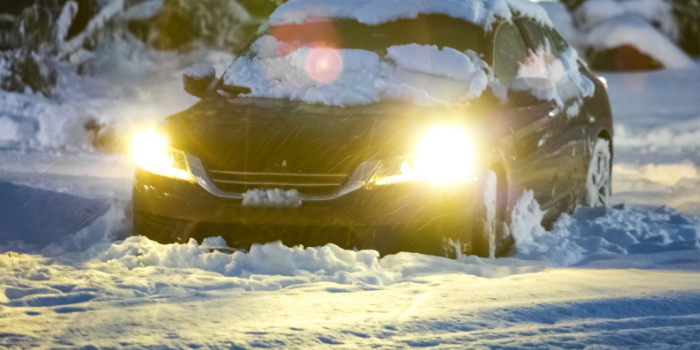 Service: noun / sur vis / a helpful activity; help; aid; to do someone a service.

Ignoring the December wind that whirl-winded around me making the leather collar of my jacket slap and sting my cheek, I slid the key into the lock of the walk-in service door at Hometown Motors. I had just been promoted to Service Manager and the paperwork “ghosts” of my predecessor needed to be cleared up by months’ end if I was to hang onto my promotion. I was burning midnight oil to clean up the loose ends. The snow had been falling for over three hours and layered a blanket of white across the parking lot that the outside stadium lights lit up to an almost mid-day brightness despite the hour.  It was late, I was tired, and most importantly I was tardy for my Father’s birthday party. I wanted to go home, shower, and get to Dad’s to wish him the best of the coming year.

That’s when I heard it. The sound of tires slowly crunching the new-fallen snow rolling up behind me. Next, there was my shadow cast large upon the door by headlamps while I fumbled to lock the door as the car drew nearer to where I stood.

Turning to look at the car, I tied to guess. Was this a drop off for the half-day Saturday schedule? As three of the four doors swung open, I put on my best “It’s nice to see you,” smile and said, “Can I help you?”

The young woman that stepped out from behind the wheel was small and almost timid in appearance. Her cheeks were that rosy color that winter weather painted them when more than a little time was spent outside. Two young girls appeared from the rear doors of the car, teeth chattering away at near the speed of light.  None of them were dressed for the weather. Light jacket on the woman, sweaters on the young girls. It took a moment, then the woman spoke in a voice broken with shivers while she huddled the children close to her.

“We have no heat in the car. The children are freezing. I can’t see out the windshield.”

Freezing was an exaggeration, but it was obvious that they were cold, and it seemed like they had been for quite a while.

“I can let you use the phone. Is there someone you can call?”

This was 1984, long before it was commonplace for people to walk around with cell phones in their pocket or purse. Hell, then the battery alone required a suitcase-sized tote.

To make a long story short this young lady was driving from Memphis, Tennessee to Wild Rose, Wisconsin bringing her two nieces home to their father. The father was also on the road on his way home from Green Bay. There was no way to reach him for several hours.

“We’re closed. I can have someone look at it in the morning for you.”

“Where will we spend the night?”

While she spoke, I glanced at the two children, watched them shiver, saw the tears cold air had put in their tired eyes, took a deep breath, glanced back at the door I still had not managed to lock and exhaled. Thoughts of everything from what if one of the kids got hurt on something, to what if this is a cleverly orchestrated robbery ran through my head.

One thing was clear. The three of them were cold.

“I could lose my job for this.”

I pulled the door open against the mounting layer of snow accumulating and ushered all 3 inside.

Two cups of what must be the worst tasting hot chocolate and one cup of coffee from the same vending machine and the three of them sat in the waiting room snacking on chips.

The fix was simple and quick.

The blower motor resistor block was a pattern failure. We had them in stock. It took more time to fill out the warranty repair order than it did to lower the glove box door, release two spring clips and swap out the part.

In less than a half-hour from the time I heard those tires roll up behind me, I was watching their taillights fade in the distance.

I put the incident out of my mind, locked up, and went straight to Dad’s party.

Fast forward two weeks.  Monday, December 24, 1984. The parts man walked to my desk and placed a large box on top of my paperwork. The box was addressed to me and marked “Personal.”

In the box was a huge assortment of holiday sausages, cheeses, crackers, and all the fixings. Tucked inside a corner was the customer’s copy of the warranty work order for replacing the blower motor resistor. Written over the page with one of those holiday pens that writes in multi-color glitter was, “Thank you! We will never forget your kindness!”

At noon we closed the shop and all 4 technicians, the parts guy, and I enjoyed our treat while wishing each other the best of the holiday season.

I still have that piece of paper.