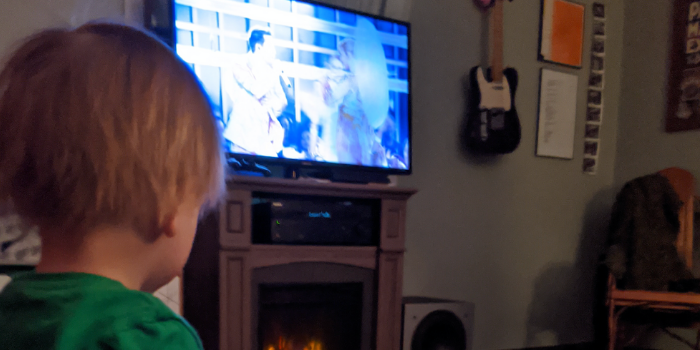 I’ve never liked Taylor Swift. (Bear with me.) When she first arrived on the music scene, she was a little bit country, and I was a lot-a-bit rock ‘n roll. As she got bigger and poppier, my musical tastes became more esoteric and indie (yes, I’m kind of a snob). I heard “Shake It Off” in 2014 during a performance of the teachers and students in the elementary branch of the school I worked for and thought it was a cute song – I didn’t even know it was Taylor Swift, and if I had known, I would have probably liked it less. I had a bit of a fixed mindset about the pop star.

Fast forward through arguments about if 1989 is actually a good album, through little understood references to her beef with Kanye West, through minor scandals and public heartbreaks, and my opinion has changed little. I don’t know Taylor Swift the person. The music though? Hard pass.

My son is almost two. He likes cars, dogs, dancing, and visually stimulating videos that happen across our TV or phone screens in small doses. Thus, it happened that my spouse played a Taylor Swift video for my son (shrug emoji), and it’s been a whirlwind romance since then.

I’m proud that, at first, I was simply a good sport. He wants to watch these and dance cutely for my amusement? What’s the harm? Then there was the insanity phase where I didn’t think I could tolerate more TSwift in one sitting. I couldn’t shake it off. Then a tolerance developed. Bedtime dance parties became a regular thing. And before long, I was singing all the words, finding all the Easter eggs in the music videos, and expressing opinions contrary to my norm: “I like this song.” “This is my favorite line.” We watched the Taylor Swift documentary on Netflix, and I teared up no less than three times (Did you know Kanye started the beef when Taylor was only 19 years old?!).

I find myself rethinking my view of Taylor Swift, and while this is an inconsequential opinion to have, it feels like a titanic shift of my preconceived notions. A chipping away at the cynical shield I wear day to day.

When you view things through the eyes of your child – when it’s only joy, excitement, enjoyment, and innocence, it’s difficult to hold onto your ill-founded grudges. Because he enjoys it, I enjoy it. And through that lens, there’s a base for my very own liking of some of what Taylor Swift does.

It’s widely prescribed to go into something with an “open mind”, but it’s nearly impossible to do that when you already have an opinion. I think it’s worth leaving the small, confined space of your comfort zone every now and then and challenging the opinions you formed in a different time and place.

I may never get over the absolute lyrical train wreck that is the song “Love Story” in which she makes inaccurate allusions to both Romeo and Juliet and the The Scarlet Letter, but I was an English teacher and she was 19, and she was probably like a lot of my students who didn’t get it, either. Maybe I can forgive her because she’s 30 now and (most) of her lyrics are better… right?

It doesn’t matter. My son likes her, and not just because of that, but because of her very own merits and my will being cracked through repetition, I like her a bit, too.

The Rhythm’s Guide to Being Out of Rhythm

You’re essential, and you’re out there, open, doing the work – or – you can work from a computer, which in this day and age means you can probably work anywhere. I’m the latter. I’m remote, my team is remote, and we carry on our roles as best we can (and sometimes better) from a […]

No matter who you are or what role you play in the world it’s different now than it was two weeks ago.  By different I mean changed.  Change is difficult.  The change we face now is a crisis; a pandemic.  It’s disruptive, destructive, unpredictable, and scary.  What can we do?  Change with it as best […]

It’s issue 450 of REMAN U. I was hoping to do something special – a really momentous article, or maybe just one written by Captain Reman himself. But alas, it’s challenging times we’re in. I’m writing this from a table in my home; my son (the Taylor Swift fan) is eating oatmeal beside me in […]

March 19, 2020 BY The Rhythm Of Reman
READ MORE
MORE ARTICLES