It Only Takes a Moment to Change Your Mindset

June 21, 2021 By Professor Of Professional Development Leave a comment 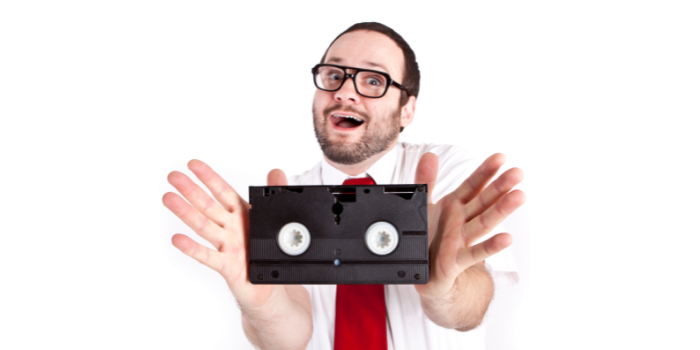 In 2001, I started my senior year in college. At the same time, I was also hired as a video-scouting intern for the Milwaukee Bucks, in the National Basketball Association (NBA). My first assignment was to purge all of the VHS tapes from the 1990s, so that we could create space for the DVD decade of the 2000s.

While all of my friends were telling me how awesome it was that I was working in the NBA, I had days when working in a dark video storage closet with no windows did not seem all that cool. Have you ever had a job like that, one that sounded like it would be great, but maybe had its not-so-great moments?

During that same year, I was also the vending manager at Delaware North Companies (DNC) for the Milwaukee Brewers. My main responsibility was to hire the best beer vendors, and train them to actively sell and yell, “Beer here!” during the home games at Miller Park. Every week, we had a manager’s meeting, which was led by our General Manager, Tom Olson.

At one of the meetings, Mr. Olson said something that struck me. He said with passion, “Derek, when I was a porter…” (At DNC, a porter is someone who physically moves the product from the warehouse to the concession areas). The beginning of Tom’s sentence was all that I remember, but it was incredibly meaningful, especially given the timing. I immediately told myself that if Mr. Olson could enthusiastically start at the bottom and work his way to the top of an organization, then I could, too.

The next day, I was scheduled to sort tapes for the Bucks. When I came into work that day, I had a little more of a pep-to-my-step… because I had arrived with a whole new mindset. I could see more clearly that my current role at the bottom of the totem pole was a necessary step on my way to the bigger picture of me desiring to become a head coach or general manager. I started to notice that everyone around me, including the Buck’s general manager, Larry Harris, had started at the bottom, too.

I don’t normally eat fast food. But when I do, it usually leads to disappointment . For the past month a commercial from a big chain burger joint has been tempting me to try their new chicken sandwich. It looked amazing. It came with pickles. I’m a sucker for pickles. I managed to abstain, until […]

After I graduated from high school, I had no clue what degree to study for or what I wanted to do for a living. All I wanted to do was play basketball. So, I stayed in my hometown for the first two years of college and attended the University of Wisconsin – Manitowoc. During my […]

My go-to grocery store isn’t the biggest or the cheapest, but they make me feel like a friend. My car insurance likely isn’t the best rate out there, but my agent makes me feel like family. The dealership we just purchased two vehicles from doesn’t have the best selection, but the people were invested in […]

June 28, 2021 BY The Siren Of Support
READ MORE
MORE ARTICLES